"The List" features the 20 hottest male rowers in the world 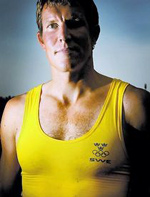 In 2008, American rower Megan Kalmoe put up a list of her 20 hottest male rowers and it has become so popular it is now called simply "The List" and rowers lobby to get on it (video montage of the 20 below). Kalmoe told the Toronto Star:

Over this last season leading up to this list, I actually did have a lot of guys coming up and introducing themselves. And, of course, my friends I do know started asking when the list was coming out, who was going to be on it, how to get on. I got to meet a lot of different people for that reason. ...

On one of the shuttles going back to the hotel after training at the worlds, I was on the bus with a bunch of athletes from the British men’s eight that I hadn’t met before. They started talking about the list very loudly in a way that I could definitely hear them. It was just smiles all around and a lot of banter.

It's her list and she makes no apologies for it being subjective, writing on her blog:

In general, they’re based on a combination of sex appeal, rowing performance (past and present), style and other intangibles that make people stand out in a crowd. The List is closed to active Senior National Team members, but I do try to identify athletes from lots of different countries, lightweights and heavyweights, big boat and small boat rowers, sweepers and scullers (hence why The List is not made up entirely of the Australian and British teams). Nominations are also a bit of the luck of the draw–since I may not interact or even see all of the athletes at the World Championships every year; I am limited to scouting on chance encounters on the dock, around the boat yard, on the buses, or in hotel elevators.

Alas, there are no shirtless shots but she has good taste and the list is all in good fun. Her only omission was not including the stunning Danish foursome from the 2008 Olympics.