World Series, Rangers vs. Cardinals: Do you have a rooting interest?

Share All sharing options for: World Series, Rangers vs. Cardinals: Do you have a rooting interest? 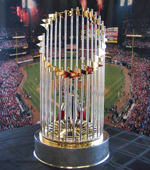 The World Series starts Wednesday with a matchup few expected -- the Texas Rangers vs. the St. Louis Cardinals. I can't say this is one to excite the senses.

I will be rooting for the Rangers, the first World Series loser to make it back since the 1992 Braves. I can't stand baseball allowing wild cards into the playoffs since it cheapens what is a long regular season. The Cardinals got into the playoffs on the final day after the Braves collapsed, beat the Phillies in a short series and then the Brewers.

If they win, they would be a fluky champion and not the best team in baseball. It's compounded by St. Louis getting home field because the National League won the All-Star game, a lousy way to decide something so important. Since 1985, the team with the home field advantage is 20-5.

Expect the ratings to be low, possibly the lowest ever, but they will help Fox in that time slot and to promote programs. Most fans I know are fans of a particular team, not baseball itself, so I can't see this series grabbing people's attention.

I am curious as to whether readers are into this series, a particular player or who will win. I will take the Rangers in six.