NFL Week 4: The Eagles have landed, with a dud

Share All sharing options for: NFL Week 4: The Eagles have landed, with a dud 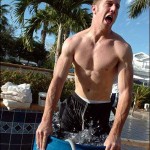 Philly falls to 1-3; the Bills are no longer perfect, but the Lions are; Cardinals screwed by a bad call; the Steelers are in rough shape.

How I saw Week 4 of the NFL, plus hot player of the week:

The Philadelphia Eagles (1-3) are officially in trouble. It's one thing to lose to the Falcons and Giants – both teams won 10 games last season – but to lose at home to San Francisco after leading 20-3 at halftime is inexcusable. The 49ers are a West Coast team that had to play an early East Coast game. That's normally a recipe for a win by the home team.

The Eagles, though, can't hold a lead. They blew a double-digit fourth quarter lead to the Falcons and were outscored 21-3 in the second half against the 49ers. The Eagles, despite all their big-name free agents signings, have been outscored 36-0 in the last three fourth quarters; their only victory is against St. Louis, a pitiful 0-4 team.

Michael Vick threw for a career-high 416 yards, but could not muster a second-half touchdown. It didn't help that rookie kicker Alex Henery missed two chippy field goals. This is a team that hasn't figured out how to finish. Backup QB Vince Young bragged in July about how the Eagles had assembled a “Dream Team,” which only made every opponent focus that much harder on knocking them off. While the season is clearly not over, the Eagles have dug themselves a big hole and only better play and not bragging will dig them out. Vick still sounds like a whiny bitch after losses, but I don't expect anything more from him.

Meanwhile, the 49ers are 3-1 and have won back-to-back East Coast early games. They are the best team in the NFC West (the Cardinals and Seahawks are 1-3 and the Rams 0-4) and a couple of boneheaded coaching moves against Dallas from being 4-0.

Can't stand prosperity: One week after being the toast of the league by beating the Patriots for the first time since 2003, the previously unbeaten Buffalo Bills fell on their collectives faces, losing 23-20 to the Cincinnati Bengals. The Bills appeared to be cruising, leading 17-3, then got shredded by the Bengals' rookie combo of QB Andy Dalton to receiver A.J. Green. The Bills (3-1) have a big home game next week against the Eagles.

Can stand prosperity: The Detroit Lions (4-0) did it again. They rallied from 20-0 down last week to beat the Vikings, and topped themselves Sunday by erasing a 27-3 deficit and stunning the Dallas Cowboys, 34-30. They are the first team in NFL history to win consecutive games despite trailing each by 20+ points.

The Lions need to award a game ball to Tony Romo, who single-handedly brought Detroit back into the game. Romo threw two interceptions returned for touchdowns and a third that set up the winning TD drive for the Lions. It was a classic choke job, the biggest collapse in Cowboys history (the previous was in 1965 when Dallas blew a 21-point lead). The Cowboys, after two straight comeback wins where Romo was hailed, are now 2-2.

After the game, Lions coach Jim Schwartz got in a great shot at Cowboys loud-mouth defensive coordinator Rob Ryan. During the week, Ryan dissed Lions super-stud wideout Calvin Johnson by saying that the Cowboys had two receivers who are better. After Johnson's two-TD day, including the game winner, Schwartz said: "I'm glad the third best wide receiver on the Cowboys is on our team.”

Under the radar I: I have no idea what to make of the 3-1 Tennessee Titans. Beating the Ravens was impressive, but wins over Denver and Cleveland don't do much for me. But the Titans are playing in the AFC South minus Peyton Manning, so stealing the division is not out of the question; I just want to see more of them before rendering a judgment.

Under the radar II: The San Diego Chargers are 3-1 but haven't gotten much pub, but it's for a good reason. All three wins have been unimpressive at home against the Vikings, Chiefs and Dolphins (a combined 1-11). In their only game against a good team, they lost by 14 to the Patriots. Still, the 2010 Chargers lost games to bad teams, so at least the 2011 version is ahead of that.

Hangover: Teams that lose the Super Bowl always struggle the following year. The 1972 Dolphins are the only team to lose the Super Bowl one year and win it the next, and most recent losers have failed to make the playoffs the following season. Last year, the Colts went 10-6 and won their division a year after losing to the Saints, but the season was a grind, with a wave of injuries.

The Steelers (2-2) are the latest Super Bowl loser to struggle the next year, and they looked lame in a 17-10 loss to the Texans. Had the Texans -- an undisciplined team -- not kept committing penalties, it would have been a blowout. But Pittsburgh is getting slammed by injuries to an already shaky offensive line and now QB Ben Roethlisberger is in a walking boot with an undisclosed foot injury. It will be a long season in Pittsburgh.

Blown call: The Giants (3-1) got a huge break when the refs ruled receiver Victor Cruz "gave himself up" after falling to the ground on the game-winning drive against the Cardinals (1-3). Actually, Cruz stumbled and left the ball on the turf, which was recovered by the Cardinals. But when a player is ruled to have given himself up, the play can't be reviewed. The Cards got screwed and Cruz avoided being the bonehead of the week. Former head of NFL officials Mike Pereira said: “In my opinion, it should have been ruled a fumble.” I agree since the usual standard for a player ruled to have given himself up is when he slides feet first or takes a knee. Even the NFL seemed to acknowledge the possibility of an error by saying it was a "judgment call."

Quick hits: I expected the Rams to be much better in Sam Bradford's second season. Instead they are 0-4 and in free fall. ... The Jets (2-2) looked like crap in their 34-17 loss at Baltimore. QB Mark Sanchez has regressed and the defense is not a shutdown unit likes it has been. This is not good with the Patriots looming next.

Hot player of the week: Alex Smith, the San Francisco 49ers QB, has always been on my hot radar. The shot of him emerging shirtless from an ice box (click on photo top right) shows his sexy body, and despite his less-than-impressive facial hair, he's still a very good looking guy. And he played superb in the second half against the Eagles, throwing for two touchdowns in the Niners' 24-23 comeback win. If the 49ers keep on winning, Smith will be one to watch, on or off the field. Here is Smith with a canine companion: 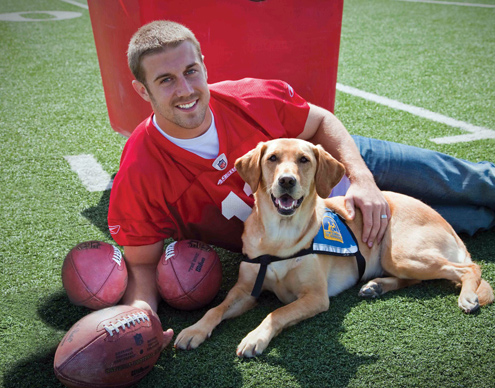