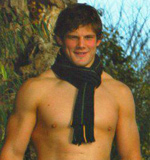 The Rugby World Cup just ended in New Zealand, with the host Kiwis taking the title with a hard-fought 8-7 win over France. In honor of the event, Dean Knight, a gay fan, has put together his all-hot team from the event. His list on Facebook caught the eye of the New Zealand Herald:

The page had 273 likes and lots of discussion on the wall about which players should be selected. It also features plenty of pictures of topless rugby players. ...

Knight said, "The team has a good balance of shapes and sizes, with some big and beefy players, some hirsute, some clean-cut, some suave and sultry. And even a twinky Justin Bieber look-alike."

David Pocock from Australia was put on the list, both for his looks and for his support of gay marriage. Openly gay referee Nigel Owens was on the list in the ref slot. The Herald noted that Kiwi Dan Carter was left off the list. "The view was taken that the underwear man is now past his prime," Knight said. I love it -- controversy in an all-hot list.

Hat tip to Dean Knight for thinking of us.