Share All sharing options for: Meet Andrew, the latest gay high school athlete who is blogging 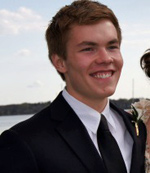 I have been writing this year about gay high school athletes who have started blogs. They tend to feed off and inspire each other and provide a window into what it means to be a gay teenager in America. The latest is the Transpiration of Andrew, written by Andrew, a senior captain of his varsity swim team in suburban Minneapolis.

Andrew is out to his parents and close friends and has a boyfriend, but I am choosing to not use his last name since he wants to come out to everyone on his own terms. He says that he is "awful at writing and love strawberries." I will trust him on the latter but don't believe the former. Despite some grammatical errors, he is a very expressive writer who posts on a wide range of subjects from his desire for a six-pack and his love of Ke$ha (yep, he's gay), to the NoH8 campaign, his coming out process, high school fashion and his swimming season.

One of my favorite posts was his description of his date with Duke, his boyfriend. They went to an amusement park that had a Halloween theme:

We even held hands outside of the mazes. Some people commented on us. Surprisingly, a lot of people were saying things like “You guys make it possible”, and “Here’s to you guys” which I’m pretty sure was a good thing. We even had a little girl ask us why we were holding hands, Duke just kinda shouted back as we were moving through the crowd, “It’s because we’re gay!” I liked that, being open with complete strangers. ...

Cold from the park we drove to my house quickly. I quick told my parents who were sleeping that Duke and I got home. They just nodded and we went upstairs to my room and talked a lot. And cuddled, lots of cuddling :) It was awesome warming up with him. I felt invincible with happiness. It was great, we both wished that he could’ve stayed and just slept together on my tiny twin mattress.

However, Duke needed to get home so at 12 we got into my car, and drove to his car which was at his school (So his parents couldn’t track his car). We kissed goodbye and drove our separate ways home. It was magical.

Andrew hopes to take Duke to the senior prom, so that will be one angle I am certain he will explore. He does an awesome job with his blog and is another sign that many gay teen athletes are willing to share their stories and become a resource. I urge you to check out the Transpiration of Andrew.

I also like his sense of humor, which come through in his writing (his Twitter feed is called "It Gets Wetter"). I asked him for a picture he would like to run with this and he sent me: 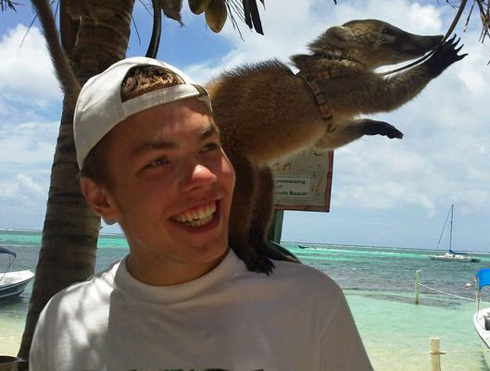