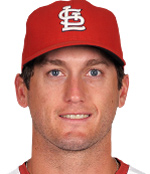 Update: Game 7 was so blah that it's not worth a separate item. The St. Louis Cardinals beat the Texas Rangers, 6-2, and are the World Series champions. The series, though, basically ended in Game 6.

Previous: The headline might seem harsh but there is no other angle to explain the Texas Rangers blowing two-run leads both in the ninth and 10th innings before losing Game 6 of the World Series in the 11th, 10-9, to the St. Louis Cardinals.

In consecutive innings, the Rangers needed only one strike to win their first title and both times they failed, the first with ace closer Neftali Feliz giving up a game-tying triple that outfielder Nelson Cruz totally misplayed. In the 11th, David Freese hit a home run to end the game. Some history:

This collapse was unprecedented. No team had ever come from behind twice in the ninth inning and later to tie a World Series game or take the lead.

St. Louis became only the third team one out from elimination in the Series to rally and survive, following the New York Giants in Game 5 against the Philadelphia Athletics in 1911 and the New York Mets in the Buckner game in 1986, according to STATS LLC.

The game was sloppy, with five errors and 22 men left on base. But what it lacked in style, it made up for in drama. The Rangers will forever relive the last three innings of Game 6.