Aside from the Packers, who are the elites? Pittsburgh plays keep-away; lack of thrilling games; Tebow bombs; hot player of the week.

This season is a muddle. Outside of unbeaten 7-0 Green Bay (which had a bye Sunday), it's hard to figure which are the elite teams. San Francisco (6-1) is a virtual lock to win the NFC West with a four-game lead but I'm still not sure how good the 49ers are. The Giants are 5-2, but lost to Seattle (2-5) and barely beat the Dolphins (0-7). The Eagles (3-4) smoked the Cowboys (3-4) Sunday night and finally look like a dominant team, but was that the start of a trend or an aberration?

In the AFC, the Steelers (6-2) looked impressive in their 25-17 win over the Patriots (5-2). The Bills, Bengals and Ravens are also 5-2, the Chargers are 4-2 pending their Monday night game and the Texans are 5-3 and heavy favorites in the Peyton Manning-less AFC South. The Jets at 4-3 are lurking and very much in the hunt.

The Steelers did a brilliant job in game-planning against the Pats. They played tight pass coverage and held Tom Brady to 198 yards passing and 3 of 10 conversions on third down. As important was the Steelers offense, which played a ball-control short passing game, holding the ball for nearly 40 minutes and converting 10 of 16 third downs.

The Patriots' weakness is their defense and their inability to get off the field was the key to the game. When you force one punt and that's with 40 seconds to go, you know a defense has not done its job. The Patriots have owned the Steelers in recent years – Brady was 4-1 against them coming in – so this was a big win for Pittsburgh and could be a decider in home field should the two meet in the playoffs.

As for the rest of the AFC, the Bengals have won four in a row, but three have come against the Jaguars, Colts and Seahawks, a combined 4-19. The Bills remain a nice story, beating the Redskins 23-0 and handing Washington coach Mike Shanahan his first shutout in 24 years as an NFL head coach or offensive coordinator. I'm still not sold on the Ravens, who had to rally to beat the Cardinals. Their big test will come next week in their rematch at Pittsburgh.

This is what the NFL always strives for – parity – but the result has been very few “must watch” games so far and very few the past month that have been memorable. The national TV games the past three weeks have either been blowouts or dogs; the past three Sunday night games, for example, have a combined score of 135-24. In contrast, college football has had back-to-back weeks of games everyone talked about – Michigan State over Wisconsin and Stanford over USC in three OTs. Maybe it's because my Colts suck with Manning out (which hurts the entire league), but this has been the least interesting season at nearly the halfway point in years.

Tebow time: Tim Tebow was ghastly in Denver's 45-10 loss to Detroit. He threw for only 172 yards, most of them in garbage time, was sacked seven times and lost a fumble (returned for a TD) and had an interception (also returned for a TD). I figure a lot of people won't be Tebowing this week. It's obvious to tell he's not a starting NFL quarterback, but at least now the fans braying for him to play will finally get to see it for themselves.

Finally a win: I guess the Cardinals winning the World Series rubbed off on the Rams in St. Louis. Coming in 0-6, the Rams dominated the Saints (5-3), 31-21. New Orleans scored 62 points the week before, yet fell behind 24-0 to the Rams, who had scored 57 points total in their first six games. 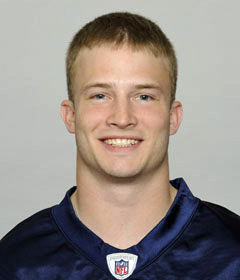 Hot player of the week: Being a masochist Colts fan (0-8 and halfway to a perfect losing season), I watched most of their 27-10 loss to the Titans.

One bring spot was seeing Titans return specialist Marc Mariani, right, about the only thing watchable in the game.