Welsh rugby player Jed Hooper comes out after meeting someone

Share All sharing options for: Welsh rugby player Jed Hooper comes out after meeting someone 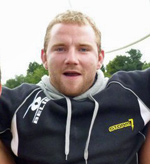 Jed Hooper, captain of the Bristol, England, Old Ruffians rugby club, has come out as gay. The catalyst was a man he started to see. He told the Bristol Post:

"I met someone earlier this year who said he could not be with someone who was in the closet. That, basically, was the catalyst that I needed.

"Before that, I think I had already told about ten friends and their reaction was very positive so that gave me an inkling of what might happen. And I also thought if the crap really hits the fan then at least there are ten people on my side!"

I think it's cool that meeting someone he wanted to be with helped Hooper to realize he couldn't stay closeted. Hooper came out in the most modern of ways -- on his Facebook page.

"The text basically said something along the lines that 'I've been hiding it and fighting it for too long, and I can't hide any more. If you can accept me this way then great ... and if you can't then I don't need you and you can get lost!'

"I then cried my eyes out as I was thinking to myself 'what have you done?, but very quickly I must have had 40 replies and all of them were positive."

The reaction from his team and the community has been overwhelmingly positive. Hooper offered to step down as captain if the team thought it would be a distraction, but they would have none of it. Most of the comments on his Facebook page after the article came out were teasing him about one thing or another, a sign that he is very popular and outgoing. "Rumour has it you only did the interview to try and get a boyfriend!" read one.

"If anyone is reading this and they're in the same situation as me, all I want to say is don't bottle things up because, trust me, there is light at the end of the tunnel," he said. "The world's not against you. If my story can help one person then this has been worth it."

Hooper is the second Welsh rugby player to come out publicly, after Gareth Thomas (now retired). He sounds like a terrific guy who loves life and rugby and he will make a terrific role model for anyone who thinks coming out in a "macho" sport is impossible.

Note: Hooper is Welsh but plays for Bristol in England. I first had Bristol in Wales, so my apologies to whomever that would have bothered. ;-)