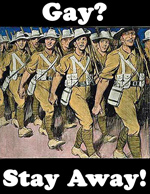 The Boy Scouts of America does not allow gays or lesbians to serve as scouts or scout leaders, saying it "believes that homosexual conduct is inconsistent with the obligations in the Scout Oath and Scout Law to be morally straight and clean in thought, word, and deed." Baseball Commissioner Bud Selig is speaking tonight at a scout gala called "Character Counts" and that has prompted the Los Angeles Gay and Lesbian Center to call out Selig.

The center sent out this press release, where it praised Selig for past support of gay issues but said his speaking before the scout gala is a big step back:

Major League Baseball Commissioner Allan “Bud” Selig is scheduled to deliver a keynote address tonight at the annual Boy Scouts of America’s (BSA) Character Counts Gala in Los Angeles. While Selig has publicly stated that “Major League Baseball is a social institution that brings people together and welcomes all individuals of different races, religions, genders, national origins and sexual orientations into its ballparks,” his appearance at a an event for an organization known for discrimination throws a major curveball at the lesbian, gay, bisexual, and transgender (LGBT) community.

“Mr. Selig’s participation and support of an event held by the anti-gay Boy Scouts of America only sends one message — that inequality and discrimination are acceptable. In the past, Selig has taken a hard stance against discrimination and fined MLB employees for using homophobic slurs. He has publicly condemned the hateful behavior of certain players and coaches like John Rocker, Ozzie Guillen, and most recently, Roger McDowell—and almost a third of Major League Baseball teams this year participated in the ‘It Gets Better’ campaign. Mr. Selig’s outward support of Boy Scouts of America completely contradicts all of these steps forward and his claimed intolerance of discrimination in Major League Baseball.

Ironically, the Boy Scouts of America Los Angeles Area Council touts their event as one that is ‘making an investment in character’ and is themed ‘Character Counts.’ Investing in homophobia or discrimination of any kind is anything but an investment in character! At a time when bullying in schools is a major issue facing our country’s youth, to support an organization that promotes discrimination against youth only fuels the fire of bullies. If he delivers his keynote address as planned, we implore Mr. Selig to tell the Boy Scouts of America that people of true character welcome diversity and accept all for who they are.”