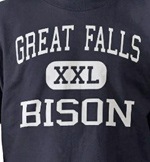 A Great Falls, Mont., high school football player is facing rape and sexual assault charges after a hazing incident this fall in the locker room.

Alex Botina-Roehm, 18, was arrested Monday and is charged with hazing two students. His bail was set at just more than $100,000.

Court records say the hazing involved coming up from behind an intended target and placing one arm between the legs, wrapping the other arm around the body and lifting the victim off the ground.

The alleged incident happened in September and was reported to school authorities, but a grandmother of one of the victims went to police last week after she learned nothing had been done to Roehm and similar hazing continued.

Detective Bruce McDermott said Wednesday police believe other football players likely participated in the same activity, called "power gobbling," but in those cases it was done among friends and considered consensual.

This case was different because the alleged victim didn't know the offender, McDermott told the Great Falls Tribune. "I guess that's where it departed from fun among friends," he said.

It sounds like the school basically did nothing to stop any of this despite serious charges being leveled against an athlete two months ago. The grandmother who called police has an email exchange where the coach promised a "come to Jesus talk" with the team. But the police report states that, "this has reportedly been going on for some time in the locker room, and Roehm and others seem to act freely without consequences."

Hazing is dangerous and demeaning and needs to be stopped. There is never a justification for it since it involves the powerful preying on the weak; it's not a harmless ritual or rite of passage and differs in degree and intent from practical jokes or teasing among teammates. A "boys will be boys" defense doesn't cut it.