Steve Weatherford, a punter, might have the NFL's best body 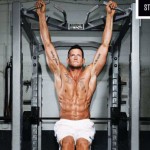 Men's Fitness has a spread this month on an NFL player with 5% body fat, who's the strongest guy on the team pound for pound. That player is a punter, of all people, Steve Weatherford of the New York Giants. “His physique is just ridiculous,” said a fellow punter. “He makes us look good even though none of us look as good as him.”

The New York Times profiled Weatherford's fitness regimen and it is impressive. He can leg press 1,000 pounds for reps, squat 475 pounds and bench nearly 400 pounds. Then there is his diet.

He eats about 200 grams of protein a day (the Food and Drug Adminstration’s daily recommendation is 50 for a 2,000-calorie diet), loading up on scrambled egg whites, bunless turkey burgers and lean-ground-beef lasagna. If he and his wife go to a swanky restaurant in Manhattan, he often eats beforehand, then has a salad, “while my wife — who is 5-7, 110 pounds and works out like twice a year — crushes a steak,” Weatherford said. “She’s amazing.”