Share All sharing options for: Journalist and sports fan Steve Kornacki tells his coming out story 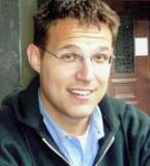 Steve Kornacki is a political reporter who has written for several publications and is now with Salon. I have seen him on TV many times and always been impressed by his knowledge and insight. And he also pinged my gaydar. Kornacki has now come out in a terrific column on Salon.

I just didn’t fit the stereotypes of gay men. I was an ESPN addict as far back as elementary school. I’d also had early crushes on girls. So my epiphany at that basketball game was as sudden as it was incompatible with my self-image. I fought it relentlessly.

The story tells his journey of self-discovery of finally coming out at 32 and a lost love because he stayed too long in the closet. It's well worth the read. But what I found fascinating is that a professional man living and working in Boston, New York and Washington DC still did not feel comfortable coming out for years. Kornacki addresses that:

You may be wondering why I was so afraid. It’s 2011, after all, and I live in Manhattan, surrounded in social and professional settings by gay people. It’s not like I come from a morally judgmental family; I never feared my parents or other relatives turning their backs on me. But 17 years of fear and hang-ups can be hard for a person to shake.

My friends were confused about me, but I’d throw them off my trail by embracing the persona of a cynical, slightly neurotic fatalist. My buddies would urge me to approach an attractive girl at a bar, and I’d tell them it wouldn’t be worth it – not when I was liable to wake up with a sexually transmitted disease. Friends would try to set me up with girls and I’d remind them that most marriages quickly devolve into loveless, soul-crushing arrangements. They didn’t think I was interested in any kind of relationship – straight or gay.

In a way, I can’t even explain why I kept this part of myself private for so long. But whenever I would contemplate a change, I would think back to my youth, and the fathers, teachers and coaches who had been my adult role models, all of them old-fashioned family men. How could I possibly be so different?

The last sentence is very revealing, the idea that gay people are "different," and that if you don't fit a stereotype you can't possibly be gay. In some ways we are different, but in most ways we're like anybody else. Being a sports fan or athlete no longer puts you outside the gay mainstream.

Kornacki, like a lot us, is the product of a culture that equates certain traits with masculinity and being a man, and even living in a tolerant and open environment did not change that for him. It shows that our sexuality is intensely personal and we have to accept ourselves first before we can expect others to accept us. Kornacki, though, is finally able to be who he is and I applaud him for that.

I junked the old cop-out about waiting until I was in a relationship to come clean, and one by one I sat down with friends, family and co-workers and let them know the real story about me. Some conversations were quick, others were more involved, but all of them felt good. One buddy listened to me, cracked a few jokes, and then started talking about football. “You’re still going to be the Steve who’s obsessed with random teams, right?” he asked. Of course.

And that’s the point. This isn’t the start of some brand-new life. I actually like a lot about the one I already have. But now the fear and paranoia are gone. And my life can finally make sense to the people who matter to me.

I would enjoy hearing from others about their coming out experiences and whether or not they can relate to what Kornacki went through.