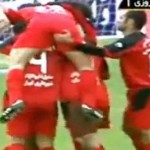 Talked about messed up. Iran is considering administering 74 lashes to two soccer players who had a butt grope after scoring a goal Saturday (video below). The two, Mohammad Nosrati and Sheys Rezaei, play for Persepolis and have already been suspended and fined $40,000 for what are being called "immoral" acts.

After one of their teammates scored the winning goal of a 3-2 match on Saturday, ending a long losing streak, Nosrati touched Rezaei’s butt as they and their teammates jumped on one another in celebration.

“This shameless act upset, angered, and outraged Iranian sports fans,” said cleric Jalal Yahyazadeh, who is a member of parliament. “What happened is absolutely not acceptable because it was a very ugly thing,” he added. ... Valiollah Hosseiny, a Tehran criminal court judge, told the Fars News Agency that the two players have committed “an act against public morality”, and that they should be sentenced to 2 months imprisonment and 74 lashes.

ABC News said that lashings are not likely to occur:

Hadi Ghaemi, director of the International Campaign for Human Rights in Iran, told ABC News that the players would likely only be fined. The head coach and members of the international team defended the players, whom Ghaemi said were joking with one another in what has become a common gesture among players.

Ghaemi said there is no law in the Iranian penal code that suggests lashings for the specific crime of men groping one another’s butts. However, if the crime was deemed “inappropriate behavior,” akin to “what boyfriends and girlfriends do,” then lashings could be ordered.

To say it's an overreaction is putting it very mildly, but it's not a surprise in homophobic Iran, where gay people are still executed. Still, it has been heartening to see people come to their defense. A former coach of the two soccer players said it was much ado about nothing and told those offended, sarcastically, "come and execute them if it relieves you."

Another player also said it was an overreaction, adding, “When I was playing in Germany, such things happened all the time."