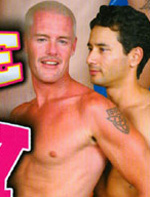 Not only that, but in one of his videos, Cawke pretends to be straight. "Hi I'm Hytch. I just answered an ad and now I'm here to see what it's like to be with a guy." Bwahahahahahahaha!!

Most of me thinks Hogan has to be a complete idiot to have gone down this road. Most of American parents think teenagers need to be protected from sex, not confronted with it in English class and in after-school sports. The parents interviewed by Fox all felt this was totally inappropriate. Whether that's right or not is kind of irrelevant because that's reality.

Hogan's biggest mistake: Not telling the school that just hired him in September. When this is floating around the Internet, and one of your movies is carried in a local video store, you are begging to be fired when somebody finds out. Whether it's in sports, politics, or education...the cover-up always makes the "crime" worse. And one of the movies was reportedly just released last year!

And let's be clear about what we're talking about. His three movie titles are: 'Just Gone Gay 8,' 'Fetish World 1,' and...brace yourself...'Ass Fucked by a DILF 2' (in which he is the DILF). When you're a high school teacher and coach and you're shooting pornographic movies like this, either you're begging to be fired...or you're an idiot.

Let me be super clear about this, for those readers with reading comprehension issues. I am not anti-porn. I am not anti-gay. I think we protect teenagers from conversations about sex way too much. But in today's society, reality is that of all the professions you can pull off while shooting porn...teaching is second-to-last and coaching is last.