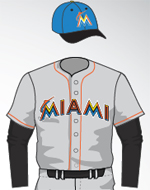 Apparently someone in Miami didn't learn the lesson of the Denver Nuggets. The latter featured one of the ugliest logos in sports for years, with a rainbow silhouette of the Denver skyline. Now the Miami Marlins (formerly of Florida) are trading in their longtime teal-and-black combination for -- well -- a rainbow.

And while the team won' t officially unveil their new uniforms until next week (the logo was leaked weeks ago), Outsports has received a tip (unconfirmed, so it's just a rumor at this point) that this is the new uniform. The road uniform is to the right; The home uniform is white with orange belt and undershirt, and you can see that after the jump; photos of the home cap hit the internet earlier.