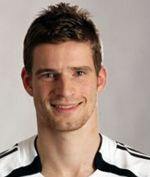 Add German soccer player Arne Friedrich to the list of athletes who are asserting their heterosexual credentials amid rumors they are gay. He says it's odd that when he types his name into a search engine and it suggests adding the word "gay," tens of thousands results appear.

"It's very funny when you name the Internet as search words then typing and there is direct 'gay' behind it. I'm with my girlfriend for 10 years together and very happy. "

A day after Friedrich made these remarks on a German TV show, his girlfriend, Linn Rodenbeck, wrote an open letter, according to Raphael Honigstein of SI.com:

"Apologies to all those who might be disappointed now," she wrote. "No, Arne is not gay. And I'm he sure he would be the last person not to admit to it (if he was gay)."

That settles it for me, though I find it funny that Friedrich is bothered that Google's algorithm helpfully suggests adding the word "gay" to his name in searches. I typed in "arne friedrich schwul" into Google and got 56,900 results. Maybe he liked being named one of the sexiest footballers at Euro 2008. Or puzzled when the German site Queer.de polled its readers on the soccer player most likely to be gay and he finished first.

For the record, he said he does not know of any German pro players who are gay, though he would be OK with it. But he thinks it would be tough for an out player. It would not "be easy ... If you [come out], you would have run into some headwinds."

Philipp Lahm, the guy who finished second in the poll of most likely to be gay, earlier this year said that wasn't true and advised gay players to stay in the closet.

Tanja Walther-Ahrens has a bone to pick with Lahm and Friedrich. She has written a book on sexual orientation and discrimination in German soccer and says their responses don't help.

"I can understand if celebrities are disturbed by some rumors, such as the one mentioned in connection with alcoholism or fraud. But homosexuality is not a crime. When Lahm and Frederick emphasize this, it looks like they are strongly opposed to homosexuality. ...

"I hope the next player now does not come under pressure to recognize their heterosexuality. It would only make the debate more infected. It would be nice if a football star could ask the opposite question instead: 'If it was so - what's the problem?' Would it be so difficult? League and national team players do not realize they are role models."