NFL Week 14: God must be a Denver Tebows fan, but He hates the Cowboys

Share All sharing options for: NFL Week 14: God must be a Denver Tebows fan, but He hates the Cowboys

This is getting ridiculous – now the opposing team has bought into Tebowmania. How else to explain Denver's 13-10 overtime win over Chicago? It was Denver's sixth straight win and made Tebow 7-1 as a starter. It lifted the Broncos to 8-5 and the lead in the AFC West.

The game basically came down to Chicago's Marion Barber making a monumental gaffe by forgetting to fall down. The Bears (7-6) had the ball 2nd and 10 at midfield with two minutes left and Denver out of timeouts. Barber took a handoff and ran to the left side. If he slides short of the sidelines, the clock continues to run and Denver would have at most 30 seconds left to drive the length of the field for a chance to tie. But Barber, for some reason known only to him, ran out of bounds, giving Denver an additional minute.

Tebow, who stunk for 3 ½ quarters, got hot and moved Denver into field goal position. Matt Prater drilled a 59-yarder (it would have been good from 70) and we went into overtime. On the Bears' first possession, Barber struck again. He had a first down in sight on a run at the Denver 30 when he fumbled and the Broncos recovered. We all knew what was going to happen next – Tebow drove the Broncos to the Bears 34 and Prater kicked a 51-yard field goal to win it.

Watching Tebow, as Billy Witz of Fox told me, is like watching an NBA game – you only have to watch the last five minutes and you've seen the game. The Bears-Broncos game was 0-0 well into the third and set back offensive football 75 years. But the final few minutes were highly dramatic and added to the Tebow mystique.

Denver now has a clear shot of winning the AFC West, with its final two games at Buffalo (5-8) and home to Kansas City (5-8). Looming next, though, is a home date with the Patriots (10-3). Tebow vs. Tom Brady – CBS has a ratings woody anticipating this one.

Our friend Joe in Philly posted this on Facebook, summing up a lot of people's thoughts on Tebowmania:

Chicago Bears, I despise you. You're just letting that damn Tebow win again. WTF IS WRONG WITH THE ENTIRE NFL LETTING THIS BOOB WIN?????

Cowboys choke: Tony Romo is the anti-Tebow. The Cowboys (7-6) blew a 12-point lead with five minutes to go and lost a thriller to the Giants (7-6), 37-34. For the second week in a row, Cowboys kicker Dan Bailey made a field goal on the last play of regulation -- last week's would have won at Arizona, this week's would have sent the game into overtime.

But like last week, the kick didn't count because a coach called a timeout right before the snap. Last week, it was Jason Garrett, his coach, and this week it was the Giants' Tom Coughlin. Both times Bailey missed the second kick and the Cowboys suffered another gruesome loss. It left the Giants and Cowboys tied for first in the NFC East with three games left. Eli Manning continues to show that there is no better QB in the fourth quarter. And Romo seems to always not be quite good enough (still not sure how he missed a wide-open Miles Austin that would have clinched the Giants game).

13-0: The Packers (13-0) remained perfect by blowing out the Raiders (7-6). I think the Packers will go 16-0. They will easily beat Kansas City next week on the road, then have Chicago (no offense) and Detroit (no discipline) at home to close out the season. If the Packers win next week, they will clinch home field advantage in the playoffs, so they could take their foot off the gas in the final two weeks. But they are so tough to beat at home that I think they will win out even if they play a lot of backups.

With New England going 16-0 in 2007 and the Colts and Saints going 14-0 and 13-0 to start 2009, the Packers' run doesn't have the same wow factor. And going unbeaten in the regular season means zilch once the playoffs start. The Pack is still the odds-on favorite, though, to become the first repeat champ since 2004.

Thrillers: There were four great endings in the early games – Patriots 34, Redskins 27; Texans 20, Bengals 19; Lions 34, Vikings 28 and Saints 22, Titans 17. All four came down to basically the final play with one team inside their opponents' 10.

The Patriots (10-3) survived when the tying-touchdown pass by the Redskins (4-9) was called back for offensive pass interference. Two plays later, Rex Grossman hit Santana Moss in the hands at the 5. Moss, in the seasonal spirit of giving, scooped it forward where it was intercepted by Jerod Mayo. New England's defense once again played like crap for large chunks of the game, only to be bailed out at the end by a turnover. If the Patriots were to win the Super Bowl, they would have done it with perhaps the worst defense ever for a champion. It's no wonder Tom Brady seems wound extra tight this year (he and his offensive coordinator got into a sidelines shouting match); if he is not on his game, the Patriots have no chance.

The Texans (10-3) won the AFC South and clinched their first playoff spot in team history with a last-play win at Cincinnati (7-6) on a pass from third-string QB T.J. Yates to uber-hot Kevin Walter. The loss was a killer for the Bengals' playoff chances, dropping them a game behind the Jets (8-5) for the final wild card slot. I still don't buy Yates being able to do much in the playoffs, but the Texans will have a home playoff game. Their final three games – Carolina, at Indianapolis, Tennessee – are all winnable and the Texans might wind up with a bye.

The Lions (8-5) took an enormous step to a wild card spot by hanging on against the 2-11 Vikings, with a huge thanks to the refs. On what was the final play, Vikings QB Joe Webb lost a fumble with the ball at the Detroit 1. However, the officials missed an obvious face-mask call against the Lions, that had it been called would have given the Vikings one untimed down. Penalties can't be reviewed, and for that reason the Lions avoided blowing a game they once led 21-0.

The Saints (10-3) kept their hopes for a first-round playoff bye alive by surviving against the Titans (7-6) and rookie QB Jake Locker. The Titans had three shots from the Saints' 5 but Locker threw two incompletions and was sacked on the last play. The Saints look unbeatable at home but are just 4-3 on the road; no team in the league needs a home playoff game and a bye more than New Orleans, which I think won't be able to win two consecutive road games in January. The 49ers' loss at Arizona left the Niners and Saints tied at 10-3, with San Francisco holding the tiebreaker for now.

Spread 'em: The only moment of drama in the Ravens' 24-10 win over the Colts (0-13) came on the last play. Down 24-3, the Colts had the ball inside the Ravens' 10. The game was over unless you were a bettor. The Ravens (10-3) were favored by 16 and were covering. But on the final, meaningless play of the game, the Colts scored a touchdown and covered the spread. That howl of pain you heard was anyone who had bet the Ravens. That's one reason I don't bet money on NFL games any more.

Leaderless: The Colts have not led at any point in a game since Week 5 against the Chiefs, eight full games. This is a stunning stat, courtesy of the Indianapolis Star:

It's the longest such streak in one season since the 1943 Chicago Cardinals also failed to lead in eight straight games, according to the Elias Sports Bureau. They finished that season 0-10.

Anti-Seahawks bias: I got this email this week from Thomas in Seattle. It was an awesome takedown of my ignoring the Seahawks all season:

Reading your recap of NFL week 13, I noticed something I call "The Seahawks effect on Outsports.” I live in Washington state and am a Seahawks fan, despite the futility of it all. I don't blame you for not giving them much space on your website this season. Many of their wins come against equally hapless teams.

However, I noticed when the Seahawks lose, they get at least some mention in your recaps in all but two instances so far. But when the Seahawks win, they aren't mentioned at all. No worries - I'm not upset considering their performance. But the coincidence is still interesting.

Week 2 - LOSS - "The Steelers, meanwhile, basically had a bye, shutting out Seattle"

Week 3 - WIN - No mention, except for recounting week 2's game vs. Pittsburgh

Week 8 - LOSS - "the Bengals have won four in a row, but three have come against the Jaguars, Colts and Seahawks"

Seattle won't get a mention again this week since they play Monday night.

Hot player of the week: This one is in honor of Texas Daytripper, a longtime Outsports reader and Houston Texans fan. He wrote this earlier this week --

"If you know me, my favorite player is Owen Daniels of the Houston Texans. This evening I got to see my favorite player and had him autograph his replica jersey for me. He's really handsome and I just adore his smile. Here's about the best shot I got of him.": 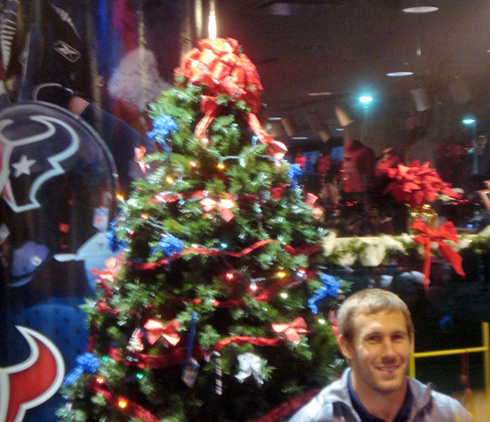