Hulk Hogan: If 'I was a homosexual I would embrace it'

Share All sharing options for: Hulk Hogan: If 'I was a homosexual I would embrace it' 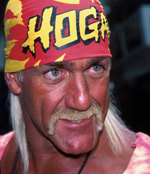 Former pro wrestling superstar Hulk Hogan is suing his ex-wife for defamation after she said he cheated on her with fellow wrestler Brutus "The Barber" Beefcake and was violent and abusive (Brutus is filing his own suit). It sounds like a nasty marital spat but what struck me was Hogan's defense:

"If any of that was true, I would admit it, and (if) I was a homosexual I would embrace it. It's just so crazy to hear, so I have a real problem with it... If you're going to say I'm something that I'm not to try to ruin my career and my livelihood... I have to answer her back. It's so ridiculous. I don't mean to laugh about it, because it's not funny. But it's insane. It doesn't make any sense to me."

The Hulkster, whose real name is Terry Bollea, filed a defamation suit against his ex, Linda. From Us Weekly:

In her memoir Wrestling the Hulk: My Life Against the Ropes, Linda writes of harrowing physical, mental and emotional abuse at the hands of her husband during their 24-year marriage.

"[Hulk] tore my clothes, threw lamps, and held me down on the bed with his hands around my throat during arguments," wrote Linda, who has two grown kids, 23-year-old Brooke and 21-year-old Nick, with the WWE star. "I was always afraid he would kill me in one of his rages."

Hogan, 58, denies her charges and filed the defamation suit in response. Linda Bollea, with whom Hogan has a daughter, received about 70% of their assets in their divorce. He told Howard Stern in October that had he been gay, his ex-wife would have brought that up in the divorce proceedings:

"First off, I've got like four or five people who are gay and lesbian and like my best friends. Believe me ... if I was gay or if I had a homosexual encounter one time, I would tell you. ... It's not true and it's mean-spirited."

It was cool to see Hogan not slam the idea of being gay and if fact saying he would embrace it if it were true. It's the allegations of violence and abuse that are the really incendiary charges.

Hogan appeared in October talking to Howard Stern. He addresses the gay part starting at the 1:25 mark: