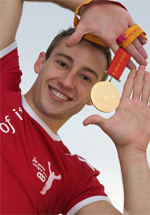 Openly gay Olympic champion diver Matthew Mitcham returned from an abdominal injury to take the Australian diving championship in the 10m platform on Sunday. With just two weeks of preparation he blew away the sub-Olympic competition.

According to the Associated Press, Mitcham is putting all his eggs in the 10m platform basket for the London Olympics. It's the event he won in Beijing with the highest-scoring dive in Olympic history.