Tim Tebow believes God is helping the Broncos to win

Share All sharing options for: Tim Tebow believes God is helping the Broncos to win 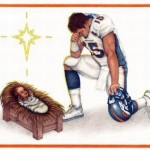 I am trying to resist the urge to write again on Tim Tebow, even though he is the most compelling story in sports. We know he really, really believes in God and wastes no opportunity, again, to remind us. But even I never thought he really believed God took sides in a football game, until I read this from Mark Kisla in the Denver Post (via Pro Football Talk):

"I believe in a big God and special things can happen," Tebow said Sunday, after the Broncos defeated the Bears 13-10, only because the Broncos believed they couldn't lose.

And even his teammates think that divine intervention is at work:

"Tebow came to me and said, 'Don't worry about a thing,' because God has spoken to him," linebacker Wesley Woodyard told me in a quiet corner of the Denver locker room.

With his right hand, Woodyard desperately reached out and ripped the football from the grip of Chicago's Marion Barber just as it appeared he was going to bust a big run to put the Bears squarely in scoring position during the opening minutes of overtime.

This is, of course, nonsense and should offend the religious and non-religious alike for its trivializing of belief. Unless God is laying heavy money on the Broncos in a celestial Vegas, there is no reason for Him to care about the outcome of an NFL game.

We asked Hanson if Tebow would be winning games if he wasn't such a strong believer -- and the pastor replied, "No, of course not."

The Broncos play the New England Patriots, aka the Evil Empire, this week and Cyd was aghast that I want the Pats to lose (meaning I want Tebow to win). That's not true -- I never can root for the Patriots, yet also can't root for Tebow. A tie would be unsatisfying, so I am hoping Tebow has a bad flu that sidelines him, allowing the NFL's hottest player Brady Quinn to come in and save the day. That would be truly divine.

On an unrelated note, and just in time for the holidays, an Outsports reader sent along this card done by a friend who is selling it on Ebay: 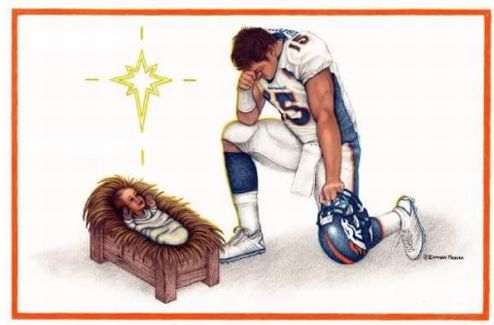