Share All sharing options for: NFL Week 15: The Patriots slow down Tebowmania

Tebow and Broncos go down; the Packers lose, the Colts win; New York teams suck; hot player of the week.

Sunday was a weird day in the NFL, with the unbeaten losing and the winless winning. But all eyes were on Denver and the battle of Good vs. Evil, Jesus vs. the Hoodie, the Broncos vs. the Patriots. And it was the Patriots -- whose QB had an out-of-wedlock child and tight end poses with porn stars and coach who was busted for cheating -- who prevailed big, 41-23. God answered Cyd's prayers. Tim Tebow lost for only the second time this season, yet this defeat was not on him. The Patriots (11-3) are simply better, especially when getting three turnovers inside Denver territory. Tebow is not a good enough quarterback (few are) to overcome that.

This game did not surprise me. The Bronocs' formula for winning with Tebow has been to keep the games close and let Tebow work his fourth-quarter magic. That's fine against the likes of Caleb Hanie, Matt Moore and Christian Ponder, but not against someone as good as Tom Brady, who threw for two touchdowns and ran for another.

With the win, the Patriots clinched the AFC East and almost certainly a first-round playoff bye. The Broncos (8-6) still lead the AFC West, thanks to the Raiders' gagging away a 13-point lead late against Detroit. A Tebow playoff appearance is still on track if they can take care of business against the Bills and Chiefs.

Denver coach John Fox had this backhanded compliment of Tebow when asked about his improvement at quarterback: "Six or seven weeks ago, people said he couldn't hit the broad side of a barn. Now he can." Guess it's better than nothing.

In case you missed it, here' the SNL "Tebow meets Jesus" clip people are talking about:

Unbeaten no more: I had a feeling the Chiefs (6-8) would give the Packers (13-1) a tough game but I still expected a Green Bay win. Kansas City, though, was dominant throughout in a 19-14 win that was not as close as the final score indicated. Aaron Rodgers had by far his worst game of the season, completing less than 50% of his passes and being harassed all game. I have always liked how interim Chiefs coach Romeo Crennell game-plans quarterbacks –he always gave Peyton Manning fits – and he made Rodgers look ordinary for one day.

Despite the loss, the Packers can still clinch home field in the playoffs with a win against the Bears next week. What's troubling, though, are injuries to the offensive line, which can cripple any team. I thought it was total BS last week when ESPN's Steve Young said the Packers were “unbeatable.” No team is in today's modern NFL. I still like the Packers to win it all and maybe a loss takes some pressure off the whole unbeaten talk, but other coaches will examine the Chiefs' game plan to see how they stopped Rodgers when no one else could in the previous 19 games.

Suck for Luck: For the past six weeks, it was assumed the Colts would have the top pick in the 2012 draft and take Stanford quarterback Andrew Luck. This caused a zillion articles about whether the Colts would take Luck and keep Manning; trade Manning or trade the Luck pick. But after the Colts won their first game, 27-13 against the Titans, Luck to the Colts is not a lock.

The 1-13 Colts trail the 2-12 Rams and 2-12 Vikings in the race for the worst record, but have winnable games at home vs. the Texans (and a rookie QB) and at 4-10 Jacksonville (and a rookie QB). The Rams play the Steelers and 49ers (both near-certain losses) and the Vikings get the Bears and Redskins (both iffy). If two or more teams are tied for the worst record, the top pick goes to the team that played the weakest schedule, and the Colts currently lead that. How ironic if the Colts don't get the chance to even draft Luck after all that has been said and written.

New York, New York: What a lost day for the Big Apple teams. First, the Giants (7-7) laid an egg at home against the Redskins (5-9). Hours later, the Jets (8-6) got crushed by the Eagles (6-8). This sets up what might be an elimination game next week – Giants vs. Jets. The Giants can still lose to the Jets and stay alive but would need the Cowboys to lose at home to the Eagles. Philly, amazingly, can win the division with two wins if they wind up in an 8-8 tie for first.

The Jets, meanwhile, are tied for the final wild card spot in the AFC with the Bengals, with three other teams a game behind.

Rolling: The Seahawks (7-7) have only a slim playoff shot following their third straight win, a 38-14 blowout of the Bears, but they are playing very well. A winning record would be quite a turnaround for a team that looked dead a month ago. Speaking of dead, the Bears (7-7) have lost four straight since Jay Cutler got hurt. What looked like a great season has evaporated.

The NFC wild cards look to be Atlanta and Detroit, both 9-5 and both two games ahead of their nearest competitor with only two games left.

Texas trouble: While the Texans (10-4) have clinched their first franchise playoff spot, their 28-13 loss at home to the Panthers (5-9) is troubling. Houston has a rookie QB in T.J. Yates and it's hard to see him doing well in a playoff game against the likes of the Steelers or Ravens. The Texans will be one-and-done in the postseason. 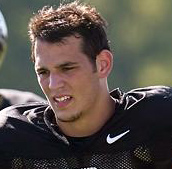 Hot player of the week: Watched the Ravens-Chargers game with Cyd and Jim Allen and we froze the DVR to get a closer look at Chargers rookie linebacker Andrew Gachkar. He didn't do much except look good standing on the sidelines, but that's enough for this award.

The website Shot of Ginn has a photo of Gachkar with some coeds and we also learn he got stitches while at the University of Missouri after being involved in a fight at a pizza parlor.