Share All sharing options for: Mark Cuban says an NBA player will come out in the next 'three to five years' 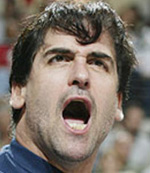 Dallas Mavericks owner Mark Cuban joined TMZ Live recently to talk about the prospects of a female coach in the NBA. Cuban said the NBA will eventually embrace a female coach, just as they will soon embrace an openly gay player. "I think within the next three to five years, absolutely," Cuban said.

When asked about the perception of the league as homophobic, Cuban said that perception doesn't exist.

I don't think there's really the perspective that we are intolerant. I think the only issues we've had is with some fallback and some old-school-type language that's derogatory to gays. So there are certain words that were accepted five to 10 years ago that guys are starting to recognize you can't use any longer. And that hasn't been a problem. I think it will be more of a media sensation when somebody comes out than it will be a player issue.

It's comical to me to hear these predictions that someone will "absolutely" or "definitely" come out in the next year, three years, five years, etc.... When we started Outsports in 2000, I remember being asked for the first time when someone would come out. I didn't know when, but at the time it was "inconceivable to think that it won't happen by 2010." Well, it's now almost 2012 and nobody's done it.

It's already been five years since John Amaechi came out. At the time, Cuban said the first out player in major pro sports would make a windfall of money. That was five years ago and no one has done it. What makes Cuban think that in just three to five more years someone will?

Last year when Boston Herald columnist Steve Buckley came out, he said that there would definitely be someone out in pro sports by 2015. I chatted with him recently, and a year after coming out he now sees the fallacy of that statement. Certainly it could happen, but there's no telling when someone will personally be ready to make that leap. David Testo says it won't be for a long, long, long time.

The reality is, these predictions are based on the wrong facts. Just because we can get married in a couple states and it's obvious a vast majority of fans and reporters would be okay with it doesn't mean someone will "absolutely" come out soon. I hope they do. And someone may. But to say it will "definitely" happen is completely misleading.

Hat tip to The Advocate.