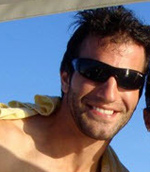 Mike Zigomanis, a player in the Toronto Maple Leafs organization, says that nude photos on a website are not of him. The website isanyoneup.com posted photos of a clothed Zigomanis from his Facebook page, along with two nude photos that did not show a face.

Zigomanis plays for the Toronto Marlies of the American Hockey League. Isanyone up "acts as a forum for jilted ex-girlfriends or former lovers to anonymously splash naked pictures of their one-time partners — outing them by full name through a screenshot of their Facebook profile." (I was able to find alleged nude photos of a UCLA football player on the site.)

According to Hunter Moore, the 20-something American founder of the site, the images were posted by "Andrea," an alleged friend of the hockey player, who uploaded them to her Facebook account nine months earlier. “The pictures are over a year old,” Moore has said. “I’m guessing he’s pretty angry over it.”

NBC's Pro Hockey Talk says there is not a whole lot Zigomanis can do about getting the photos removed.

First of all, if he claims copyright to the lascivious pictures, he’s essentially admitting that they’re of him.

Zigomanis could also obtain a defamation order in hopes of obtaining the IP address of the person who posted the pictures on the website; however, as Toronto Internet lawyer Gil Zvulony tells QMI, that might not get him anywhere either.

“A U.S. court will not enforce a Canadian defamatory judgement,” Zvuolony said. “Sometimes that IP address would lead you to a dead end. A Canadian judge does not have power to have it removed from the site.”

I can understand why Zigomanis would deny these photos are of him, but having seen them, he certainly has nothing to complain about in that department.