NFL Week 13: Cowboys lose as only they can; Denver Tebows win again

Share All sharing options for: NFL Week 13: Cowboys lose as only they can; Denver Tebows win again 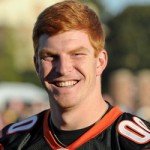 How bout dem Cowboys? Leave it to the Cowboys to lose a game like no one else ever has, by icing their own kicker. It was both lovely and bizarre to watch and was the most important result on Sunday. Dallas kicker Dan Bailey drilled a 49-yard field goal as time expired to give the Cowboys a 16-13 win over the Arizona Card. … huh? … The kick didn't count? Oh, of course, there was a timeout called a nanosecond before Bailey's kick.

We've seen that before, the opposing team calling a timeout to freeze the kicker. Fox announcer Dick Stockton assumed Arizona had called the T.O. as did everyone watching. But no, the timeout was called by Jason Garrett, the Cowboys' coach for reasons still baffling (maybe he likes forming a T with his hands). The kick did not count and Bailey tried again. He missed the second try and we went into overtime … where the Cardinals won a long pass-and-run from Kevin Kolb to LaRod Stephens-Howling. "I was glad they iced their kicker so I didn't have to,” Cards coach Ken Whisenhunt said after the game.

It was Cowboys' fans who were howling after another classic December meltdown by Big D. With the loss, Dallas blew a huge chance to put a death grip on the NFC East, since the Giants lost late to the Packers (the quietest 12-0 ever). But the Cowboys are now 7-5, just a game ahead of the Giants. The teams have two games against each other, the first next week in Dallas.

What was about as worse as Garrett's timeout was how the Cowboys did not use one of their two when then had the ball at the Arizona 31, with 26 seconds left. A couple of runs or a pass could have gotten Bailey a lot closer for his field goal attempt, but Garrett stupidly let the clock run down. "We very well could have taken a timeout there," Garrett said after, sounding like he was a fan with a sideline pass and not a coach who gets paid to make such decisions. A 49-yard field goal is no gimme and two timeouts would have afforded Dallas plenty of options to get closer. I wonder if Wade Phillips was calling in the plays to Garrett for old times sake.

Keeping on: The Broncos and Tim Tebow did it again. Beating the 2-10 Vikings, 35-32, was not that surprising but it's Denver's fifth straight road win and makes Tebow 6-1 as a starter. It also ties Denver for the AFC West lead with Oakland at 7-5.

Tebow might think it's divine intervention that's helping the Broncos, but its guys making plays when they need to. His receivers have really stepped up, and the defense has been stellar. It gave up 32 to the Vikings, but had one pick six and a late interception that set up Denver's winning field goal. Under Tebow, the margin of victory has been 3, 14, 7, 4, 3 and 3. Who knows if they can keep it up, but the Broncos have injected some juice into an otherwise average season.

Can Tebow and the Broncos make the playoffs? With games left against Chicago (which does not have a functional quarterback) and Buffalo (5-7) and Kansas City (5-7), 10 wins are within reach. The only game Denver will be the underdog in will be Dec. 18 against New England. I bet NBC picks up that game to put on Sunday night football (in place of Ravens-Chargers). In contrast, the Raiders play next week at Green Bay, and also play Kansas City, San Diego and Detroit. A slight edge goes to the Broncos.

They cover: The Colts (0-12) were 20-point underdogs at the Patriots (9-3), only the seventh time since 1978 a team has been a 20+-point underdog. Five of the previous six dogs covered and things looked bleak for the Colts when they were down 31-3 in the second half. But the Patriots fell asleep and Colts new QB Dan Orlovsky went nuts, throwing for more than 350 yards and two touchdowns as Indy covered, 31-24. Improbably, the Colts were an onsides kick away from making the game extremely interesting, but in the end it was just another loss. New England has a lousy pass defense and this could be their undoing in the playoffs. They played a bit off the receivers in the fourth quarter, but Orlovsky torched them deep several times, which New England did not want. But of the Pats' possible AFC opponents, only the Steelers have a stellar passing game.

Bet this: I love this item – a California gambler named @Pistol_Pete82 bet $10 in August that the Colts would go 0-16. He got 1,000-1 odds, so if Indy loses its last four, Pete wins $10,000. He said he placed the bet after hearing Peyton Manning was having another neck surgery. The Colts play the Ravens, Titans, Texans and Jaguars and they will be underdogs in all four games.

Who are they? The most under-the-radar winning record belongs to the Titans, who are 7-5 and very much in the playoff hunt. After playing the Saints, the Titans finish with division foes Colts, Jaguars and Texans, so they could get to 10 wins though I doubt it. Other than a Week 2 win against the Ravens, the Titans haven't beaten anybody. Their last four wins have been against the Colts, Panthers, Bucs and Bills, all teams with losing records.

Nice while it lasted: The Bengals (7-5) have lost three of four, two to the Steelers and once to the Ravens. They have winnable games against the Rams and Cardinals, but to make the playoffs would likely have to beat both the Texans and Ravens, which I don't see them doing. On the other hand, given that there are three other 7-5 teams fighting for the wild card, 10 wins might do it depending on tiebreakers.

Jumbled: Does anyone want an NFC wild card? Detroit, Chicago, Atlanta (all 7-5) and New York (6-6) lost Sunday. Two of those four teams will claim the wild card spots, but I'll be damned if I can figure out which two.

San Francisco treat: With their win over the Rams, the 49ers moved to 10-2 and clinched the NFC West, their first playoff appearance since 2002. It's an amazing turnaround for a franchise that looked listless the past decade. Jim Harbaugh is the cinch coach of the year. In the playoffs, though, the 49ers will need to generate more offense. They have a terrific defense, though if stud linebacker Patrick Willis misses any significant time with a hamstring injury they will suffer. 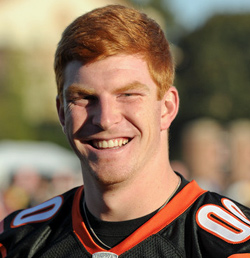 Hot player of the week: This one is in honor of Jim Allen, with whom I watch NFL games most weeks and a fan of redheads. Andy Dalton is the ginger rookie QB for the Bengals, who is battling Cam Newton for offensive rookie of the year. Dalton is a legit pro quarterback and the Bengals have a bright future as long as he stays healthy. The Bengals have quickly become a must-watch team for Jim, and they always have been the favorite team of my cat, The Woman.