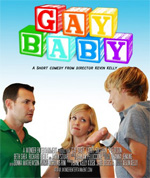 Gay Baby is a fantastic short film that made the film festival rounds over the summer. It's about a straight couple who finds out their baby is going to be a gay boy, crushing the dad's hopes of having a Major League Baseball pitcher in the family. When they go shopping for their new gay baby's bedroom, they are treated to a slew of stereotypes...and an incredibly well-done stereotype-buster.

It won the audience award for Best Overall Short at FilmOut San Diego. It was certainly worth the six minutes I spent watching it.