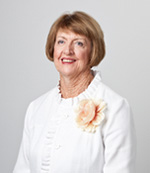 Tennis legend Margaret Court, winner of seven straight Australian Opens and a record 24 Grand Slam titles, is urging Australians to fight against the push for gay marriage in her country. Now a senior pastor in Perth's Victory Life Church, had a littany of thoughts on the subject for The West Australian:

No amount of legislation or political point-scoring can ever take out of the human heart the knowledge that in the beginning God created them male and female and provided each with a unique sexual function to bring forth new life.

To dismantle this sole definition of marriage and try to legitimise what God calls abominable sexual practices that include sodomy, reveals our ignorance as to the ills that come when society is forced to accept law that violates their very own God-given nature of what is right and what is wrong.

This is not a new theme for Court, who in 1990 accused Martina Navratilova and other lesbian tennis players of ruining the sport. In 1994 she proclaimed homosexuality and abortion to be abominations of the Lord. She has also said gay people can change their sexual orientation, and she has fought against laws to protect gay and lesbian people.

Margaret Court Television "is an evangelistic program to establish the Word of God in the lives of millions of people."

Maybe she's just pissed that out lesbian Billie Jean King supplanted her atop the women's tennis world in the 1970s.