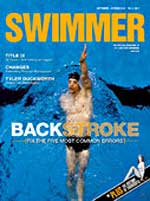 U.S. Masters Swimming has apologized for running a homophobic letter to the editor in its magazine in response to a profile of an openly gay swimmer. The apology came after pressure from gay swimmers, many of them affiliated with International Gay and Lesbian Aquatics. One group, though, was way out of line by threatening the job of the editor. No apology by the editor was necessary and the threats were out of order.

After Swimmer magazine profiled out swimmer Tyler Duckworth of "Real World" fame, the editors ran this letter in its recent issue from Glenn Welsford of Columbia Masters in South Carolina:

SWIMMER magazine’s (September – October 2010) article entitled “Swimmer on ‘The Real World’ Shakes Up Stereotypes,” did shake me up. Homosexuality is akin to thievery, adultery, and other sins that should not be tolerated or accepted as that of society just coming of age. Homosexuality destroys lives, individually, as well as that of the society as a whole. I am glad for the obvious success of Tyler Duckworth in the water but saddened to hear of his sinful homosexual lifestyle choice.

Welsford letter was followed by two that applauded diversity in swimming. That was not enough for IGLA, which posted this on its website:

The outpouring of strong support for who we are as gay aquatic athletes and our intolerance for bigotry is being heard loud and clear, thanks to the number of well crafted letters and phone calls to USMS and Swimmer Magazine in response to one man’s homophobia.

It is important to note that there has also been significant support for diversity in swimming. This is noted in a positive letter to the editor that was printed just below the hate mail. Having said this, IGLA believes it is important to distinguish between what falls within the right of free-speech, encouraging discourse and opposing opinions, and what is plain hate, meant to damage and cause harm.

Swimmer Magazine should rethink letters that offer no further discussion about the topics at hand. IGLA believes that diversity makes swimming strong. Communities are built by inclusion and appreciation for all members of the community. Making Swimmer Magazine a forum to vent one’s prejudicial beliefs or distaste for any member of US Masters Swimming is just plain wrong and destructive.

We should have used better judgment during the editorial review of Mr. Welsford’s letter. We could have asked him to resubmit his letter and made sure it met with stricter standards for such letters. And if we had deemed the second letter appropriate to print, we should have printed an explanation adjacent to it due to the sensitive nature of the topic. And we could have chosen to ignore the letter. While, again, we do not endorse or support Mr. Welsford’s opinion, we respect his right or any other member’s right to have an opinion on a topic we have introduced in the magazine and have it considered for publication.

I see no reason for the apology. Glenn Welsford was exposed as a homophobe. It is his right to hold those views and my right and others' to call him on it. Swimmer was carrying out its journalistic responsibility to present all points of view, even those it strongly disagrees with. And, as hateful and hurtful as Welsford's view are, he was addressing the topic at hand, which was a profile of a swimmer whose sexual orientation was germane to the story.

While I applaud the intense reaction to Welsford's views, the gay swimming community should have flooded Swimmer with letters to the editor condemning them, not the decision to print them. They could have requested a guest editorial to tell the swimming community about all the great things IGLA and its members do, and in the process show how antiquated Welsford's views are. My guess is that the focus instead on the magazine's editor will make Swimmer less likely to tackle subjects perceived to be controversial, lest it offend anyone.

Unfortunately, what Welsford believes is still way too common in society and the best response is to aggressively push back. Outsports has allowed anti-gay comments on our articles (we review them on a case-by-case basis), knowing our readers will offer a vigorous response and to show how much hate is still out there.

West Hollywood Aquatics took matters further and crossed way over the line when it sent Swimmer a letter, written by President Chad Young, that questioned the "moral ethics and journalistic integrity" of Hamel and Butcher. It then demanded an apology (which it said must remain as the "lead headline in the features section for 60 days") and retraction. If its demands were not met, WH2O threatened to contact both GLAAD and the ACLU "in calling for the resignation" of Hamel as editor in chief. How sad that WH2O resorted to such tactics, all the while trampling on the First Amendment it gave lip service to. Young is also misguided if he thinks the ACLU would step in to squash free expression; that's the antithesis of what the group is about.

In the same edition that featured the profile of Duckworth, Swimmer also wrote about a book by openly gay swimmer Jeff Commings and a piece from Hamel praising diversity, "The Inclusive Sport -- It's All Good!" To recap: Swimmer ran three gay-positive articles and two letters in support of those articles; it also printed one homophobic letter opposed. For that, WH2O threatens to strong-arm the editor into resigning if it doesn't get its way. That's a strange way to thank our allies.

It shouldn't be the job of editors to regulate the views of their publication's readers, but instead present them for public debate. When Sports Illustrated famously printed John Rocker's homophobic and racist comments, they were doing a service to all of us by exposing the hate that lived in the belly of this man. In running this homophobic letter, Swimmer is also doing us the service of a reminder that, despite how many advances we have made, all is still not rosy for gay athletes.