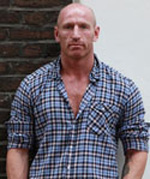 Welsh rugby star Gareth Thomas, whose powerful coming out story has inspired gays and lesbians worldwide, has started a foundation to help young people via grants, mentoring and networking. The goal of the Gareth Thomas Foundation:

To allow young people and those from marginalized groups to fulfill their potential, addressing the challenges of diversity and using role models from the wider sports world.

The charity is new, so there is not a lot on the website besides a mission statement and a short bio of Thomas. When Cyd and I interviewed him last month (where he showed us his Ellen underwear), Thomas talked excitedly about wanting to do more to help young people, especially those struggling with their sexual orientation. He talked about the loneliness he often felt while closeted, thinking he was the only gay man in the world. He hopes that through the foundation he will be able to help others to not feel so alone.