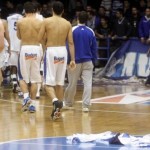 Call this Homophobia in European Sports, Part 742. This time it's the president of the Greek basketball team Iraklis Thessaloniki B.C. apologizing for a loss by his team by calling their play a "queer game." Some media outlets are claiming the coach forced the players to remove their jerseys after the game, but a more reliable source says they players did it because the fans insisted.

The Greek players union PSAK has strongly condemned the comment and actions:

Firstly protesting the rules violation of untucking the jersey from the shorts, the PSAK statement goes on to condemn “the attitude of the team administration and those who foster and tolerate [homophobic statements],” going on to say that call for more public responsibility, for “such practices do not promote the sport, but convert [it] into a Roman arena.”

I'm not sure removing your shirt constitutes a "Roman arena," but it's good to see the players union strike back against homophobia.