Share All sharing options for: Mickey Rourke in Wales to start research into movie on gay rugby player Gareth Thomas 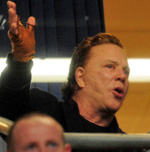 Actor Mickey Rourke is creating a stir in Cardiff, Wales, where he is visiting to do research into the life of openly gay rugby player Gareth Thomas. Filming is expected to start later this year.

Rourke, 58, arrived with a massive entourage and insiders said he had booked four of the five-star Hilton Hotel’s largest luxury suites to accommodate his pals.

The Miami-raised actor – accompanied by his girlfriend the blonde Russian model Ana Makarenko – was optimistically wearing black shades just as the capital’s February evening drew in.

This is obviously a big deal in Cardiff based on the breathless coverage, complete with a photo gallery of Rourke's arrival and a question at the end that asks readers whether they have spotted the actor in town (one person said yes).

Rourke will portray Thomas, the 36-year-old Welsh rugby star whose fantastic coming out story has been well-documented. The actor will spend time in Cardiff talking to rugby players, coaches and officials and watched Thomas -- known as "Alfie" -- play at his home stadium for the first time in 12 years. “I am excited by this movie," Rourke said, "and wanted to see Alfie playing first hand. I am not exactly sure what to expect, but I am looking forward to it."

When Outsports interviewed Thomas last month, he bristled at those who say that Rourke is too old and not buff enough to portray the rugby player.

"I don't give a fuck about that," says Thomas. "He's the perfect person to play me. ... It's not about the physical. ... I sat with him many times and he really gets it. He's a real deep, emotional person."

“What I want is an actor to play me, not a movie star.”

Rourke, after watching Thomas play, realized he has a lot of work to do, telling the Sun: "I've got to get my ass into shape." (Speaking of in shape, the paper ran this shot of a shirtless Thomas).