Tiger Woods fades in Dubai, is fined by European golf tour for spitting

Share All sharing options for: Tiger Woods fades in Dubai, is fined by European golf tour for spitting 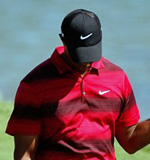 No matter how much his fans want him to be the same old Tiger Woods, he's not. This weekend he blew a great shot at winning the Dubai Desert Classic when he shot a 3-over on Sunday's final round against a weak field. Woods trailed by just one shot when he took the first tee Sunday morning. Now comes word that Woods breached the European Tour code of conduct by spitting on the 12th hole; The Tour has said Woods will be fined for his conduct.

Woods is talking about changing his swing again and that's why he finished so poorly in Dubai. We'll see. I just don't understand why his swing has had to change so much given he's already a great champion, but maybe changing his swing takes his mind off of other distractions. His window to catch Jack Nicklaus' Majors titles record is closing; Frankly, I think it's nailed shut.