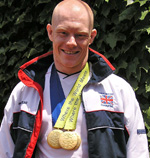 Heavily decorated openly gay powerlifter Chris Morgan won the best lifter title at this year's British championships. Lifting in the 180-pound class at the "single event" championships, he made lifts of 462 pounds, 526 pounds and 550 pounds.

This is Morgan's sixth British championship win during his career, with him completing back to back British, World and Gay Games titles over this last year.

"I’m delighted to have defended both my British Open and Best Lifter titles at this year’s British deadlift championships," Morgan said. "I’m really pleased to have completed back to back British titles, something I’ve never actually managed to achieve before. This has been one of my most difficult training cycles ever in preparation for this championship due to illness and I’m really grateful to have come through without any serious injuries.

"Following my retirement from full powerlifting events at the Gay Games in Cologne last year, I’d like to confirm my plans to compete solely in deadlift competitions from now on. I’m very grateful for all the support and encouragement from all of my colleagues in the England Team and of course all of my friends at the Federation of Gay Games after taking this decision."

Chris Morgan can be reached via e-mail.