Share All sharing options for: UFC fighter Michael Bisping calls opponent 'faggot,' then spits on his corner after fight 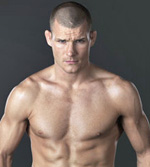 Huge tip of the hat to our friend Michael David Smith for calling out fighter Michael Bisping and the UFC after Bisping called opponent Jorge Rivera a "faggot mother------" during a promotional video. For good measure, after delivering an illegal knee to Rivera in their fight he won, Bisping then spit in Rivera's corner. That's a class act for you.

In his post "UFC should shut down homophobic slurs," Smith wrote:

The biggest and best mixed martial arts organization in the world needs to tell its fighters, staff and other employees that in 2011, homophobic slurs aren't acceptable, and that those who can't or won't refrain from using such language are going to face serious consequences. And the UFC certainly shouldn't feature the use of homophobic slurs in promotional materials like this video blog on the UFC's own YouTube channel. ...

I've heard all the explanations and excuses and the reasons for why people who use homophobic slurs say the word doesn't really mean anything bad about gay people. Nonsense. These slurs aren't acceptable, and they need to stop.

When Pittsburgh Steelers linebacker Joey Porter used a homophobic slur toward an opponent in 2006, the NFL fined him $10,000. Why doesn't the UFC similarly crack down on its athletes who cross the line?

The irony here is that UFC head Dana White has said the UFC would embrace a gay fighter. Why, so his sexual orientation becomes fodder for pre-fight promotion? Smith is 100% spot-on, though many of the commenters on his post showed their own homophobia by questioning Smith's sexual orientation and generally sounding like a bunch of morons.

Video (the anti-gay slur occurs around the 5:55 mark):