Matt Barkley, USC quarterback, Tweets that he is against equality for gay Americans

Share All sharing options for: Matt Barkley, USC quarterback, Tweets that he is against equality for gay Americans 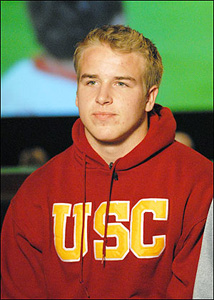 USC quarterback Matt Barkley has taken issue with the Obama Administration's decision to not defend the Defense of Marriage Act in court. Last Wednesday he Tweeted that he was shaking his head over the decision; Then he said he isn't a homophobe, he's just standing up for his belief that gay people are second class citizens.

You can share your thoughts with Matt by Tweeting him @MattBarkley. Hat tip to Towleroad.