Share All sharing options for: Win a reissue of George Michael's "Faith" 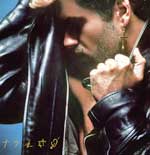 If you know your football, you can win a copy of a two-CD resissue of George Michael's 1987 album "Faith."

Outsports has 10 copies of the "Faith" reissue to give away as part of a Super Bowl contest. To win, just pick the winner of the game between the Packers and Steelers and come closest to the margin of victory.

"Faith" was a blockbuster album first released in 1987 and featured hits by Michael such as "I Want Your Sex," "Faith," "Father Figure," "One More Try," "Monkey" and "Kissing a Fool."

In addition to the two-CD reissue, there is an editon that also includes a DVD, and a deluxe edition that has remastered singles, a DVD, a 60-page book and art prints.

Details on buying "Faith" can be found on George Michael's website.