Share All sharing options for: Hudson Taylor honored by PFLAG 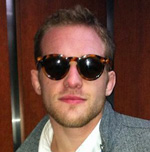 Hudson Taylor is being honored by the Parents and Friends of Lesbians and Gays with its Straight for Equality award, given to an ally of gay rights. Taylor, a former collegiate wrestler and now wrestling coach whom we written about many times for his amazing work, has most recently founded Athlete Ally.

In its first six weeks, Athlete Ally has had 1,343 people sign its pledge to end homophobia in sports. Taylor also recently met another straight ally, rugby player Ben Cohen, and the two of them will also work together as activists.

PFLAG's Straight for Equality award is in its third year and Taylor is joining such past luminaries who won such as author Maya Angelou (2009), entertainer Liza Minnelli (2010), actress Sigourney Weaver (2009), NFL linebacker Scott Fujita (2010) and diversity pioneer Johnnetta B. Cole. In 2005, the group also honored former NFL commissioner Paul Tagliabue, who has a gay son.