Share All sharing options for: Robert Kraft to speak to gay group 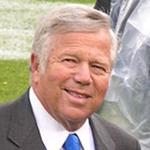 New England Patriots owner Robert Kraft will be the keynote speaker at the fourth annual LGBT Executive Networking Night on Feb. 23 at the Boston Marriott Copley Place. From the Boston Herald:

When I wrote a story for the Spirit several years ago, I talked at length to people at the Patriots and Pats beat reporters. Every one of them said the Patriots would be a team where a gay athlete would feel welcome. This is more evidence of that.