Share All sharing options for: Nick Youngquest enjoys being a male model 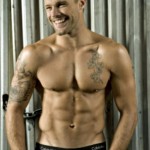 Australian rugby player Nick Youngquest, now playing in England, is enjoying his second career as a model, and is comfortable being popular with gays. He has posed for the cover of gay magazines and had what we called a Twitter bromance last year with openly gay rugger Gareth Thomas.

Youngquest, 27, first took up modeling naked for a calendar for charity and his modeling career grew from there. As he told Sporting Life:

"It started back home from rugby and grew," said Youngquest, who is unfazed by his new-found fame as a gay icon. " The first time I realized it was after doing a calendar in Australia in '06 for breast cancer. It was a naked calendar and I think gay guys took a liking to it then.

"I haven't probably taken it too seriously until the recent off-season when I went to New York and did a load of stuff over there. Obviously rugby is my priority but it's always good to have something else going on outside of rugby."

We are glad that Youngquest likes modeling, because we like looking at him. He is represented by Nous Model Management, where his portfolio includes these winners:

(Click thumbnail for larger view and that image for the full-size view):

A video from Nous: