Share All sharing options for: German footballer asks gays to come out 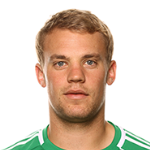 Germany's World Cup soccer goalie Manuel Neuer, who also plays professionally in Germany, says gay athletes should come out of the closet. According to Sport24:

"Yes, those who are homosexual should say so. That would take a load off their minds," said Neuer, who had an outstanding World Cup last year which saw the Germans finish third.

"And the fans would get over it quickly. What is important to them, is the performances on the pitch of the player, not his sexual preferences."