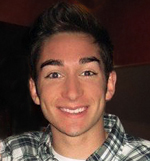 What do you do when you’re a gay high school track athlete and members of an opposing relay team say that “fags can’t race track”? Or when your coach says to a teammate, “You wouldn’t want to get beaten by some random homo”? These happened to Craig Cassey Jr. and he decided to write about it.

Craig is a senior at Penncrest High School in suburban Philadelphia and the latest openly gay high school athlete to start a blog. “Craig’s Gay Word” is a how-to guide on dealing with being an openly gay athlete, written with wit, style and great insight. His recent three-part post on “homophobic slurs and slang” is brilliantly done and well worth your time.

This is from Part 2 and happened as Craig was warming up for a meet in the 4x200 relay:

Yet even as I intensely prepared, my ears became shocked by the slang which seemingly echoed from a nearby relay team. Their outright dissing of gays rang through my head and momentarily broke my pre-race focus. The relay was chortling over their ingenuous idea: gay guys are fags for getting boners when seeing athletes like them in spandex. “At least fags can’t race track” their teammate threw in. …

For years I have ran against guys in spandex and not once while racing or in the paddock have I lost my mind to lust. To assume we have nothing else on our mind is unfair and to assume we are ill-equipped to run well is rude. Such statements used to annoy me, as did similar attitudes towards gays, but knowing our relay could better our current state seat time – I chose to hone in on my race instead of question their thoughts They would not remove my focus as I ran with my team… for my team.

He goes on to write that beating this team in a race was a more important statement than confronting them on the track about their language. In Part 3, he writes about a time last week when he did have to confront someone, his middle distance coach (whom he greatly admires). The coach, in trying to fire up one of Craig’s teammate, told the teammate: “You wouldn’t want to get beaten by some random homo.”

I wasn’t offended as much as I was shocked by my coach’s usage. Having just written two posts about this exact thing, I couldn’t help but chuckle at the situation’s timeliness. It was a bitter moment, proving how relevant such things are to my everyday life.

He then details the five-step plan he devised in handling the situation. A synopsis won’t do it justice, so take the time to read it in full. It’s great advice and shows a young man who clearly has his head on straight and thinks through before acting.

Craig is writing an article for Outsports about his coming out experience, so you will see more from him later. For those who are curious, Craig knows Brad, Robert and Ben, the three high school bloggers I wrote about last month. His blog is the latest sign that young gay athletes are becoming comfortable with sharing their stories and making a difference.