Video: Bullied teen gets fed up, fights back

Share All sharing options for: Video: Bullied teen gets fed up, fights back 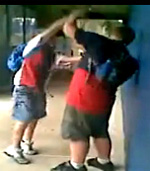 By now, you might have seen the video that's all over the Internet of Casey, a student in Australia who friends say has been regularly bullied. In the video, a smaller student is punching Casey in the face while taunting him as you can hear snickers in the background by the people filming it. Then Casey decides to fight back.

Bigger than the bully, Casey picks up his tormentor and body slams him, leaving him dazed and hurt. Both students were suspended, initially for four days.

A spokeswoman for the NSW Department of Education and Training said today Chifley College, Dunheved Campus [an Australian high school] "does not tolerate any violence and deals with all cases according to its community-agreed discipline code''. "Both students in a fight at the school shown on the Internet have been suspended ... the only injury sustained was a grazed knee,'' the spokeswoman said.

The comments on various websites are overwhelmingly in favor of Casey. I normally abhor violence, but this seems like a case where a kid has finally had enough. What do you think?