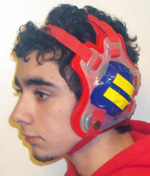 Jonathan Correia is a 17-year-old sophomore high school wrestler from East Providence, R.I. In a sign of support for gay rights, he wore a sticker for the Human Rights Campaign on his headgear during matches and practices this season.

Jonathan was inspired by the same gesture made by then-University of Maryland wrestler Hudson Taylor last season. Jonathan’s then-girlfriend saw the Outsports profile of Taylor and encouraged him to follow suit.

“She’s a very big supporter of gay rights and when she showed me that a college wrestler of his caliber can do something as simple as wear a sticker during competition, he could show an immense amount of support,” Jonathan told me. “I figured that by me wearing [the HRC sticker], I could show support to crowds not reached by [Taylor].”

Jonathan said there was little reaction to him wearing the headgear, probably since most people didn’t know what the HRC sticker represented. However, “once a few teammates tried to take it off because they didn’t really know what it was and thought it was a bit stupid,” Jonathan said.

There are a lot of gay students at his school, Jonathan said, and largely it’s a non-issue. He has a lesbian friend, who he said “appreciates that I wear the sticker.” But as a wrestler, Jonathan does have to confront a stereotype about the sport.

“Wrestling is perceived as gay because it is almost entirely made up of men, and some people think that men that go out and roll around on a mat with each other in not much more than their underwear are gay.”

That perception has not stopped Jonathan from enjoying the sport, though he was pretty badly injured for most of the season. He wrestled in the 112-pound weight class, but hopes a proposed 106-pound class is adopted so he can wrestle at that weight.

I asked Jonathan why, as a straight person, he thought it was important to support gay rights and his answer was simple, yet ironclad in its reasoning.

“I think a straight person supporting is important because straight people are the only ones that have a problem with it.”

Add Jonathan Correia to the list of straight allies and let’s hope he has a kick-ass year on the mat next season.