March Madness is exciting and sloppy

Share All sharing options for: March Madness is exciting and sloppy 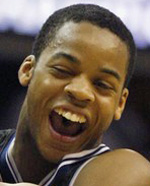 I did not watch any regular season men's college basketball but did watch a fair amount of the tournament the past four days. I had not realized the quality of the sport had dropped so much. Jay Bilas on ESPN said it is one of the weakest fields he's seen in years, owing to college stars leaving for the NBA after a season or two (or high school players skipping college altogether).

The result of the often mediocre or dumb play has been a tournament with a lot of close games and dramatic endings. Stupid equals exciting. The best (or worst depending on your point of view) was the end of the Butler-Pitt game won by Butler.

First, Butler's Shelvin Mack commits an amazingly boneheaded foul that gives Pitt the chance to win. Then, after a missed free throw, Pitt's Nasir Robinson decides he will commit an even dumber foul with the score tied, giving Butler two free throws with virtually no time left. The Butler player hits one and No. 1-seed Pitt is out.

"It was probably the worst foul in Butler history," Mack said. "But then the dude from Pittsburgh made up for me."

There have been many other examples of bad play (one CBS analyst called it a "comedy of errors") that led to tight endings. The upshot is that ratings for the tournament are the highest in 20 years (also owing to the fact that all games are now on nationally). What have your impressions been after the first weekend of the tournament?