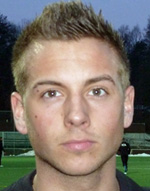 The story of openly gay Swedish soccer player Anton Hysen continues to get a lot of play in England since he is the only out pro player in his sport. In a terrific BBC radio piece by Tim Franks, we hear Hysen, 20, describe his reaction to his first piece of hate mail.

I just got mail from somebody who lives around here (Gothenburg, Sweden). He said, 'I'm never gonna come to your games again because you got a faggot on your team.' It was hate mail. He started like this: 'Hey you ugly fag, I'm not going to watch your games any more because you have ruined my life. I'm not going to watch football no more.' I'm like, OK, what do you want me to do? Do you want me go cry in a corner for you? I don't get it.

Hearing Hysen speak, he sounds like he grew up in the American Midwest, so the interview is well worth the listen. The London Daily Mail also did a profile, noting that Hysen still works part-time in construction since he plays in a lower Swedish league; his goal is to one day play full time in England. Notable in the story is a locker room shot that shows Hysen with a shirt on and a shirtless teammate who looks like he's adjusting himself. Finally, the London Guardian has a new column by "The Secret Footballer," an anonymous pro player. He is not gay and thinks that in England the biggest problem a gay player would have would be with fans and not his teammates.

I'm pretty sure a gay player would have few problems coming out to his team-mates if he were offered a hypothetical, "nobody outside the team will ever find out" clause. It isn't because we're a superior breed ... it is because we're all about looking after ourselves and, consequently, we try not to get too involved with other players' trials and tribulations. The changing room is a very harsh place to survive – say what you like about footballers' lack of intelligence (and people often do), the banter is razor-sharp and anything out of the ordinary is seized upon in a flash. But this is precisely the reason why a gay player would feel comfortable coming out here. A footballer is a footballer, it doesn't matter if you are black, white, straight or gay, players are at ease in this environment, where they are used to piss-taking.

Hysen is a pioneer but not a star by any means. However, the continuing coverage -- especially in England -- shows how novel is still is to have an openly gay soccer player in a sport where coming out is still seen as fraught with peril.