Share All sharing options for: Blake Skjellerup reports from his first trip to post-earthquake New Zealand 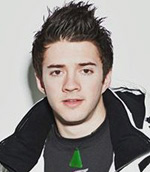 Editor's Note: Out Olympic speedskater Blake Skjellerup is visiting his home country New Zealand this week for the first time since a devastating earthquake there. He shares his thoughts with us here.

It has been one month since a magnitude 6.3 earthquake hit my hometown of Christchurch, New Zealand. In my first time home since the event, I have come to learn the full extent both physically and emotionally that the quake has had on the city.

During the day, the view out across the city looks like any other day, as if life is as usual. Once darkness falls you notice the lack of light streaming from the buildings that remain, a kilometer square block that stands lifeless and lightless. It saddens me to see a once vibrant city crippled. It is almost unfathomable for me to believe that there are people living in motor homes and in camping grounds because their houses are condemned.

As I sit here contemplating the thought of losing someone dear, like so many have in Christchurch, the emotion almost becomes too much. I feel guilty that life for me is unchanged.

People are leaving the city, and this is completely understandable: An unpredictable force has taken their livelihoods away from them. Normality may not return for some time, and emotionally that is a hard reality to face.

Thousands of business lie in the CBD cordon. Businesses with the capability to relocate temporarily have done so, others have closed for good, and others will wait it out to rebuild their business.

As I sit here writing this there is yet another after shock. A loud noise followed by a solid thud. I have not even felt the large quakes, but I am on edge. Every noise has me on edge. It’s unnerving and unsettling. The thought that there could be another large quake is constant.

The recovery effort is an unimaginable task. A city of over 400,000 people depends on the decisions of the local and national government to make Christchurch once again a vibrant city.

Even though the city is down, they still hold compassion for those in Japan. The people of Christchurch have great sympathy for the victims in Japan, and I know that the Japanese are as deeply saddened and sympathetic to those in Christchurch. Together an invisible bond is formed, between people who will never meet. Brothers and sisters in arms, uniting to recover, remember and rebuild.

With the cordon in the CBD, it is as if the heart of the city has been ripped out. In the 36 hours I have been in the city, and the small parts of it I have seen, you can tell that the other major arteries and limbs of the city are working hard to keep the city together.

Nerves are on edge, emotions are high, and the lives of some are in tatters. Comfort for most comes in knowing that one day, maybe 6 months to a year, or even longer from now, the cordon will lift, and people will return to the heart of a city that slowly, but surely, will start beating again.

The thing we all share in common is our love of this once- and still-amazing city. The aftershocks will not last forever, but this city will. The people know they owe it to themselves and the city to stay. A home will always remain a home, and no force can change that.

You can find Blake at his Web site or on Twitter.