Will you buy Tim Tebow underwear?

Share All sharing options for: Will you buy Tim Tebow underwear? 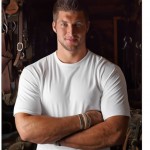 Denver Broncos quarterback and Heisman Trophy winner Tim Tebow will be appearing this week in Jockey's first ads featuring an athlete since the legendary ones in the 1970s with baseball's Jim Palmer. I have yet to see any that show Tebow in underwear minus a T-shirt, but the always-pious Tebow says the ads will be classy.

"People may say it's underwear," Tebow told ESPN, "but everyone wears underwear. It's not like I'm doing something risqué. I wouldn't do anything that goes against what I stand for. The whole campaign is very classy. I really take pride in what I endorse and what I attach my name to. It's my character and what I stand for."

His holier-than-thou shtick is tiring. Underwear is underwear and everyone does wear it. And if Tebow went shirtless and showed his package in his briefs, so what? It's nothing we all haven't seen a million times and at least once from him. There's nothing somehow classier about what he's doing, unless he's donating every penny he's getting to charity.

I have never understood his huge appeal to fans or marketers. Physically he does nothing for me, athletically he was an excellent college quarterback with a limited skill set as a pro and his ultra-religiosity that he constantly throws in our faces is nauseating.

There is also the matter of his association with and endorsement of the rabidly anti-gay Focus on the Family, for who he shilled in a Super Bowl ad a year ago. This has caused a debate on the Outsports Discussion Board about whether gays should buy Jockey. Wrote Big Blue Cowboy:

I, for one, will not buy Jockey Underwear if Tim Tebow is a spokesman for the company. Tim Tebow's association with his father's evangelical ministry should give any gay, lesbian, and transgendered person pause in considering making a purchase from Jockey. Tim Tebow and Jockey should make clear his views regarding homosexuality. I see no reason to celebrate this man until his views are made clear.

When they first announced his deal I wrote to them and said I wouldn't buy from them and their response was that they respected my views and believed that people would look at him for his athletic accomplishments and not his personal beliefs. What a load of crap. And at that time 90% of my undies were Jockey, not anymore.

I prefer Calvin Klein or 2xist underwear and own one Jockey T-shirt, so my purchasing won't change. But will you boycott Jockey because of Tebow or is it not a big deal?