Share All sharing options for: 2 people out of 5,900,000 correctly pick men's Final Four in ESPN pool 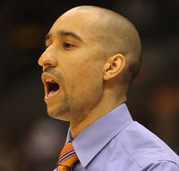 Only two people out of 5.9 million people in ESPN'S NCAA men's basketball pool correctly picked the Final Four: Connecticut (3 seed), Kentucky (4), Butler (8) and Virginia Commonwealth (11). One of them was so bad in their other picks that they stand around 6,000. But Joe Pearlman, an I.T. worker in New Jersey is in first place and can win $10,000 if he stays there.

The kicker? Pearlman knows almost nothing about college basketball (a 2 on a scale of 1-10) and made his picks in 10 minutes. What's even funnier is that he thought USC was going to the Final Four. When USC lost to VCU in a play-in game, Pearlman didn't bother changing his pick since he simply picked the play-in winner to keep advancing.

“One guy asked, ‘Are you God?’” the somewhat overwhelmed East Brunswick resident said Monday. “He said, ‘Can you tell my dead grandmother I said hello and that I love her?’”

Hey, at least that’s better than asking for stock tips. Pearlman doesn’t have any of those, either. He’s not pretending he’s a college basketball savant here — Pearlman had never even entered an online NCAA Tournament pool before this month.

Other fun stats to show how wacky this tournament has been: "According to the ESPN.com bracket organizers, just 29.7 percent of the 5.9 million entries had at least one Final Four team correct, just 2.1 percent had two correct, and just 1,093 had three of the Final Four correct."

I wound up with no teams in the Final Four but am in 10th place in the Outsports pool despite having not watched any regular season games. Ignorance truly can be bliss.