Share All sharing options for: Baseball: Joe in Philly picks the Phillies 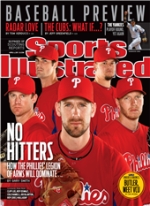 Our good friend Joe Guckin posts his 2011 baseball predictions on his terrific The Joe in Philly Experience blog. And, shocker, he picks his hometown Philadelphia Phillies to win the National League East.

So do I and most experts I've seen (I am decidedly not a baseball expert). It's hard not to pick a team with a starting rotation of Roy Halladay, Cliff Lee, Cole Hamels, Roy Oswalt and Joe Blanton. Any kind of losing streak seems almost impossible. Joe writes in his preview that he's seen many people pick against the Phillies in the division, but that's not what I've been reading.

Sports Illustrated has the Fab Five Phillies pitchers on their cover this week and picks them to win 93 games and the division, and lose to the San Francisco Giants in the N.L. Championship Series. I have seen similar picks elsewhere. People are still really high on the defending champion Giants overall in the N.L., though they do see the Phils winning the division.

In the American League, the consensus is that the Boston Red Sox are a cut above everyone. It's kind of odd to see the Yankees being considered a bit of an underdog. I'd love to see what others pick for the season, which starts today.