Are there gay athletes at BYU?

Share All sharing options for: Are there gay athletes at BYU? 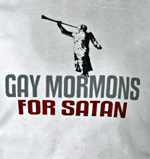 When BYU suspended basketball star Brandon Davies for having premarital sex with his girlfriend, we heard about the Mormon school's "honor code." Among its no-no's are sex, drinking swearing. And, of course, "homosexual behavior."

This got me to thinking -- has anyone ever heard of a gay BYU athlete? It seems like an oxymoron, but certainly there have been gay jocks at the school at some point. When I asked around to people who knew college sports, everyone drew a blank. Obviously, I am not talking about out BYU athletes, since by definition that person would be an ex-BYU athlete quickly. Being a gay jock is hard enough at secular campuses, let alone one run by a church that was a major backer of Prop. 8 in California.

I imagine that most gay BYU students were in the closet before deciding to go there. This is the case of a purported 23-year who writes the Gay at BYU blog. He says he went to BYU to try and "cure" his sexual feelings, only to realize his religion, and not he, was the problem.

You know they always say that being Mormon is hard, being gay is hard, but being both is Hell. ... I am gay and not a sinner. Let me say that again. I AM NOT A SINNER! I am worthy of whatever anyone else is worthy of receiving in the next life. If I was born with an attraction to men rather than women (and, YES, you are born gay - it is NOT a choice), it does not make me a "bad person." It just makes me different.

If anyone gay was an athlete at BYU or knows of someone who was, feel free to post your thoughts on what that was like. Or is "gay BYU athlete" about as likely as "Clippers win NBA title"?

Update: An interview with a former BYU athlete who is gay.