Openly gay college swimmer just one of the guys

Share All sharing options for: Openly gay college swimmer just one of the guys 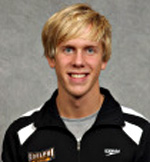 Openly gay college swimmer Kevin Rohle finds that humor and perseverance have a gone a long way to fitting in on his team at Adelphi Unversity on New York's Long Island. Rohle is the subject of a terrific profile in Garden City Patch, where he talks about his career goal of being a nurse.

"People laugh when they hear I want to be a nurse," he said. "But I tell them you better be nice because one day I can be the gay nurse who is saving your life."

The story details what sounds like a crappy high school experience for Rohle, who was picked on for being different. But swimming became a salvation, and helped him enroll at Adelphi, even though he faced his freshman year with nervous anticipation.

"I felt nervous because I did not want the guys to feel like I was going to make a move on them or something," Rohle said.

But his personality helped to bring the men and women swimmers together and he has settled into an accepting environment, even in his fraternity.

"Some brothers had to warm up to being friendly with Kev, but everyone treats him as a regular guy," said Adelphi student Jeffrey Elliot Blaine, Rohle's roommate in Earle Hall and a fellow Kappa Sigma brother. "Living with Kev is like living with any other dude," he added.